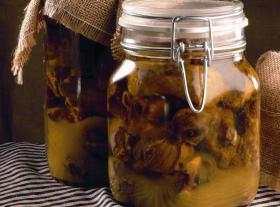 The confit process was a good way of preserving food when one or more pigs were killed at a time. It was usually done in winter, during the pigs slaughter, and eaten during the summer. Nowadays it is usually kept less time and it is has become not such a usual practice.

When the pot with the confit was opened, the fat layer which was on top, the thickest and greasiest, was removed, and the chops were ready to eat.

Tradition says it had to be done on full moon days to obtain the best quality.

Prepare the loin and the chops seasoning generously with salt and pepper. Set aside for four days. Then fry with the sausage in plenty of olive oil. Once they are cooked, put everything in a clay pot and cover with the same oil used for frying. Add more oil until it is covered and a bit more pepper. This can be preserved and used any other day. Simply heat to serve. It can be kept throughout the year.